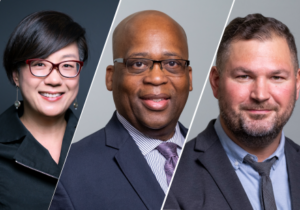 Three members of the Garrett-Evangelical Theological Seminary faculty have been appointed to endowed chairs, announced the Reverend Dr. Javier A. Viera, president of the seminary. Dr. Wonhee Anne Joh, the Revered Dr. Reginald Blount, and the Reverend Dr. Timothy R. Eberhart assumed their appointments effective January 1, 2022. Thanks to the tremendous generosity of loyal alums and donors who have supported the seminary’s mission, these endowed chairs secure support for the teaching and research mission of the seminary, as well recognize the unique and significant contributions of the three faculty who are being recognized. The three appointments are:

“Garrett-Evangelical has been doubly blessed by a world class faculty and by friends and supporters who believe in the mission of the seminary. Through their generosity, these supporters enable Garrett-Evangelical to flourish and to expand its reach and impact. We are deeply grateful for their vision and for the selfless giving,” said President Viera. “The three colleagues who are named to these chairs are each respected members of this community and of their academic guilds, as well as scholars committed to the flourishing of the church. It is an honor to recognize their efforts and leadership.”

A service of installation for Eberhart as the L. Robert and Marilyn McClean Professor of Ecological Theology and Practice will be held on Friday, April 22, 2022. This service will be held in conjunction with a two-day event to formally launch the above-mentioned Center for Ecological Regeneration. Information about the installations of professors Blount and Joh are forthcoming.

Thanks to the generosity of Harry R. Kendall and the trust he established prior to his death in 1958, this is the second endowed faculty chair at Garrett-Evangelical to bear his name. Professor K.K. Yeo also holds a Kendall chair in New Testament and is now joined by Professor Joh in an appointment that honors the legacy and generosity of Harry Kendall. Dr. Wonhee Anne Joh is the first Asian woman in the seminary’s 169-year history to hold an endowed chair. Joh has been a member of the Garrett-Evangelical faculty since 2009. In 2017, she was promoted to full professor which made her the first Korean American female full professor in systematic theology in the United States. In 2021, she was also named director of the seminary’s doctor of philosophy program.

Formerly held by Rev. Dr. Richard D. Tholin (1985-1993), Rev. Dr. Mark A. Fowler (2000-2016), and Rev. Dr. Timothy R. Eberhart (2020-2021), Blount is the fourth person to be appointed to the Murray H. Leiffer Chair since its establishment in 1984. Blount officially joined the faculty of Garrett-Evangelical in 2006, but served as adjunct professor and instructor from 1997 to 2006. Having noted his contributions to the doctor of ministry program and curriculum, his entrepreneurial efforts within the seminary, and his distinguished record of service as a pastor in the African Methodist Episcopal Church and to Garrett-Evangelical, Blount was promoted to associate professor in 2020.

Eberhart is the inaugural holder of the Robert and Marilyn Degler McClean chair, which was made possible by the generosity of Garrett Biblical Institute alums Marilyn (GBI 1958) and Robert (GBI 1959). Eberhart joined the faculty of Garrett-Evangelical in 2010 and was promoted to associate professor in the spring of 2020. In 2017, he was named director of the Master of Arts in Public Ministry program that he helped design and implement, as well as advisor for a new concentration in ecological regeneration. He currently directs the seminary’s newest initiative which will officially launch in April of this year, the Center for Ecological Regeneration.