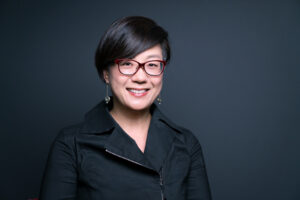 Dr. Wonhee Anne Joh has been appointed by President Javier A. Viera to the Harry R. Kendall Endowed Chair in Christian Theology and Postcolonial Studies, effective January 1, 2022. Thanks to the generosity of Kendall and the trust he established prior to his death in 1958, this is the second endowed faculty chair at Garrett-Evangelical to bear his name. Current faculty member Dr. K.K. Yeo is also the Harry R. Kendall Chair in New Testament, a position to which he was appointed in 2001. This historic appointment makes Joh the first Asian American female to hold an endowed chair in the seminary’s 169-year history.

Joh has been a member of the Garrett-Evangelical faculty since 2009. In 2017, she was promoted to full professor which made her the first Korean American female full professor in systematic theology in the United States. In 2021, she was named director of the seminary’s doctor of philosophy program.

“I’m deeply honored by this affirmation and look forward to shaping the future of theological education at Garrett,” said Joh. “I am privileged to be part of this faculty and with colleagues I regard with high respect as teachers and scholars. Our students are what make the Garrett experience significant, and I look forward to contributing further to their formation in this role.”

An interdisciplinary theologian, Joh’s research and scholarship has focused on post/decolonialism, critical ethnic/race and Asian American studies, feminist, queer and affect theories, and constructive theology. She has written numerous articles on a wide range of theological and interdisciplinary subjects. Joh is the author of Heart of the Cross: A Postcolonial Christology (Westminster John Knox, 2006) and numerous chapters and articles. Her most recent co-edited books are titled Critical Theology Against U.S. Militarism in Asia: Decolonization and Deimperialization (Palgrave Macmilian, 2016) and Feminist Praxis Against U.S. Militarism (Palgrave Macmilian, 2020). She currently has two forthcoming books, Trauma, Affect and Race: A Postcolonial Theology of Hope (Fordham University Press) and In Proximity to the Other: A Postcolonial Theological Anthropology (Westminster John Knox Press).

Joh has served on numerous committees at Garrett-Evangelical and was most recently the director of the Center for Asian/Asian American Ministries. Under her leadership the Center grew to become an integral part of seminary providing workshops, webinars, conferences, and guest speakers who engage in various disciplines that intersect with Asian and Asian American theologies. She is also an affiliate faculty member in the Departments of Religious Studies and Asian American Studies at Northwestern University.

In addition to her work at the seminary, Joh works closely with the United Methodist Women of Color Doctoral Program; the Forum for Theological Exploration Doctoral Fellowship Program; the Pacific, Asian, and North American Asian Women in Theology and Ministry, a network of women focusing on doctoral students and women in ministry and theological education; and the Asian Theological Summer Institute, a one-week intensive mentoring for doctoral students from an Asian background.

In 2003, Joh received a doctor of philosophy in theological and philosophical studies from Drew University, a master of divinity from Princeton Theological Seminary in 1992, and a bachelor of arts at North Central College with a double major in religious studies and English literature and a minor in political science in 1989. A popular lecturer, she has been invited to speak at conferences across the United States and in Canada, Korea, and Europe.

Harry R. Kendall waw born on a Kentucky farm in1876, and at the age of 17 he started in the insurance business and received solid training from his first employer, the Prudential Insurance Company. Kendall devoted his life to teaching, inspiring, and guiding his own agents, and ultimately built his multimillion- dollar insurance business, the Washington National Life Insurance Company, headquartered in Evanston, Illinois. Kendall’s habits of hard work, strong leadership, sound management, and faith, kept him active, cheerful, and committed to his business, community, and church until his death in 1958 at the age of 82. Following his death, the Harry R. Kendall Trust began distributing income to several not-for-profit organizations including Garrett-Evangelical. He was inducted posthumously into the Founders Society at Garrett-Evangelical in 1999.