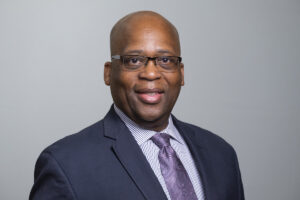 Rev. Dr. Reginald Blount (G-ETS 2005), associate professor of formation, leadership, and culture at Garrett-Evangelical Theological Seminary, has been appointed by President Javier A. Viera to the Murray H. Leiffer Chair in Formation, Leadership and Culture, effective January 1, 2022. Formerly held by Rev. Dr. Richard D. Tholin (1985-1993), Rev. Dr. Mark A. Fowler (2000-2016), and Rev. Dr. Timothy R. Eberhart (2020-2021), Blount is the fourth person and first person of color to be appointed to the Leiffer chair since its establishment in 1984.

Blount officially joined the faculty of Garrett-Evangelical in 2006 but served as adjunct professor and instructor from 1997 to 2006. Having noted his contributions to the field of Christian Education, Youth and Young Adult Ministry, the PhD and doctor of ministry program and curriculum, his good citizenship and entrepreneurship within the seminary, and his distinguished record of service to the African Methodist Episcopal Church and to Garrett-Evangelical, Blount was promoted to associate professor in 2020.

Blount’s research and writings have centered on adolescent and young adult identity formation, African American identity formation, and Christian education and Strategic Leadership in the Black Church. He speaks and teaches nationally and internationally helping faith communities envision new and creative ways to minister to, with and on behalf of young people, engage in transformative Christian Education and foster congregational and community renewal.

“I am very grateful to President Viera to be named to the Murray H. Leiffer chair,” Blount said. “Throughout my career at Garrett-Evangelical, I have greatly appreciated the encouragement and support the school has provided to my calling to theological scholarship, seminary teaching, congregational faith formation, and communal social impact. This distinguished appointment further highlights that support, and I am honored for the opportunity to continue the legacy of Dr. Murray H. Leiffer and join the company of Tholin, Fowler, and Eberhart who held this chair.”

In addition to his teaching responsibilities, Blount serves as the director of the “Holy Yearning, Holy Listening, Holy Partnerships” project, established in 2017 at Garrett-Evangelical. This project was formed out of the Lilly Endowment’s Young Adult Initiative, which aims to help congregations develop and strengthen congregational ministries that build relationships with young adults, nurture their religious lives, and foster their engagement with religious communities.

An ordained elder and pastor of Arnett Chapel African Methodist Episcopal Church in the Morgan Park neighborhood of Chicago, Blount has been a leader in the formation of Freedom Schools both in Evanston and Morgan Park. Blount and his faculty colleague, Rev. Dr. Virginia Lee, cofounded the Garrett-Evanston Children’s Defense Fund Freedom Schools Program in 2016. In addition, they served as editors for the book, Let Your Light Shine: Mobilizing for Justice with Children and Youth (Friendship Press Inc., 2019).

He has contributed numerous articles and chapters over the course of his career. Of particular note, Blount served as contributor to the CEB Student Bible (Common English Bible) along with his daughter Deborah Ayanna, that was published in 2015. He wrote discussions for the books of Joel and James, which includes questions, activities, and “Reading Differently” exercises for youth groups and small groups.

Blount received his bachelor of science degree in chemical engineering from Tuskegee University (1984) and his master of divinity degree from Candler School of Theology at Emory University (1995). He earned his doctor of philosophy from the Garrett-Evangelical/Northwestern University joint program in religious and theological studies, focusing on the areas of Christian education and youth ministry (2005).

A 1925 graduate of Garrett Biblical Institute (GBI), Dr. Murray H. Leiffer joined the faculty of the Chicago Training School for Home and Missions (CTS) in 1927. Upon the merger for CTS and GBI, Leiffer joined the faculty of Garrett in 1929, specializing in urban ministry, sociology of religion, and Christian social ethics. Leiffer retired in 1970 and was named professor emeritus. The chair in his name was established in 1984 by Dr. Neal F. Fisher, president emeritus of Garrett-Evangelical.