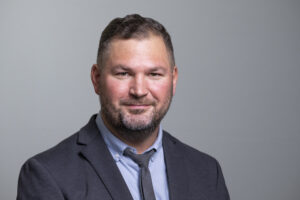 Rev. Dr. Timothy R. Eberhart, associate professor of theology and ecology at Garrett-Evangelical Theological Seminary, has been appointed by President Javier A. Viera to the Robert and Marilyn Degler McClean Chair in Ecological Theology and Practice, effective January 1, 2022. Eberhart is the inaugural holder of the endowed chair, which was made possible by the generosity of Garrett Biblical Institute alums Marilyn (GBI 1958) and Robert (GBI 1959). The McClean’s designated gift comes in support of the Hope For Creation Fund at Garrett-Evangelical, a bold initiative to raise $10 million to address the world’s urgent environmental crises and to promote the just and wise care of God’s creation for the flourishing of all.

Inducted into the seminary’s Founders Society in 2019, the McCleans have been faithful leadership donors to Garrett-Evangelical for decades. In the 1980’s they established an endowed scholarship at Garrett-Evangelical for students from the Kansas West annual conference, now known as the Great Plains Conference of The United Methodist Church. They also served as honorary co-chairs for the seminary’s $100 million Forging Our Future campaign, which concluded in June 2017.

“I have known Bob and Marilyn since I was a 19-year-old intern with the General Board of Church and Society, and later served as their pastor for 14 years in New York City,” said President Viera. “It has been a delight to reconnect with them at Garrett-Evangelical and to work with them once more on advancing the cause of faith and justice. Their witness, commitment and generosity are exemplary, and I am grateful for their willingness to help us advance our work on climate justice, one of the most urgent moral issues of our day. Their generosity will ensure that Garrett-Evangelical is a national and global leader in equipping churches to address the urgent issues of climate change and ecological justice in their communities.”

In addition to their annual leadership support, Marilyn and Robert have made a significant planned gift commitment to the seminary to create an endowment fund, with the earnings to be used to support programs, faculty, and/or scholarships that promote international justice, peace, and ecology — areas that reflect their own lifelong values and align with Eberhart’s scholarship, teaching, and public engagement.

Eberhart joined the faculty of Garrett-Evangelical in 2010 and was promoted to associate professor in the spring of 2020. In 2017, he was named director of the Master of Arts in Public Ministry program that he helped design and implement, as well as advisor for a new concentration in ecological regeneration. A service of installation for Eberhart as the L. Robert and Marilyn McClean Professor of Ecological Theology and Practice will be held on Friday, April 22, 2022. This service will be held in conjunction with a two-day event to formally launch the seminary’s newest center, the Center for Ecological Regeneration.

“Marilyn and Robert McClean have dedicated their lives to the realization of peace with justice through education, advocacy, and the prophetic ministries of the church,” said Eberhart. “With this incredibly generous gift, they have ensured that an eco-theological education will be central to the formation of religious leaders at Garrett, now and far into the future. At a time of so many urgent planetary crises, our religious communities are called to respond with resources of moral courage, theological depth, and practical knowledge. With this endowed chair, along with the center’s launch, Garrett is prepared to play our part in fostering deep cultural change for the just healing of the land and the radical reordering of the systems responsible for fractured social relationships and Earth’s degradation. I am profoundly honored by this appointment and immensely excited about the work ahead. Even more, I am grateful for the hopeful vision and faithful commitment manifest in this gift.”

Eberhart, who grew up in South Dakota, earned a bachelor of arts in religion from St. Olaf College, master of divinity degree from Vanderbilt Divinity School, and doctor of philosophy from the Graduate School at Vanderbilt University. He has taught courses in theology, Christian ethics, and practical ministry at Dakota Wesleyan University, Vanderbilt University, the Methodist Theological School in Ohio, and Garrett-Evangelical.

A sought-out speaker, Eberhart has lectured and led workshops at institutions and churches throughout the nation in the areas of ecological, economic, agricultural, and racial justice. His publications include Rooted and Grounded in Love: Holy Communion for the Whole Creation (Wipf and Stock, 2017), The Economy of Salvation: Essays in Honor of M. Douglas Meeks (Wipf and Stock, 2015), and chapters on mission, ecclesiology, theological education, and ecotheology.

After coming to Garrett-Evangelical, Eberhart directed the seminary’s Course of Study School from 2012-2015, during which he oversaw the implementation of a new residential/online hybrid model of education. He has led numerous environmental initiatives at the seminary, including Garrett-Evangelical’s founding role in the Seminary Stewardship Alliance and the completion of a three-year Green Seminary Initiative certification as a Green Seminary. He has also participated with students in a variety of protest movements in Chicagoland and beyond, including Occupy Wall Street, Black Lives Matter, Standing Rock, and Fridays for Future Climate Strikes. In 2021, he received the Exemplary Teacher of the Year Award from the General Board of Higher Education and Ministry for his support of students, curricular contributions, and public initiatives.

Eberhart is an ordained elder in the Dakotas Conference of The United Methodist Church and has served in youth, campus, young adult, and congregational ministries and on numerous boards and committees for the denomination. He is the current North American Secretary for the Oxford Institute of Methodist Theological Studies, a co-founder and co-chair of The Institute for Christian Socialism, and a co-founder and Advisory Team member of the UMC Creation Justice Movement. At the local level, Eberhart has served on the steering committee for Leadership Evanston, the board of Citizens Greener Evanston, where he was active with the Environmental Justice Evanston Committee, and the city of Evanston’s Equity and Empowerment Commission.

He, his spouse Rev. Becky Eberhart, and their three children, Henry, Frederick, and Audrey, live in West Evanston, where they enjoy working on home renovations, permaculture gardening, and tending to their six hens. They are active members of First United Methodist Church Evanston and the Abide Sunday School class.